To ensure that open and closed cooling systems are well maintained and operate at optimum efficiency it is essential that the correct water conditions are maintained at all times. This can be achieved using carefully selected scale and corrosion inhibitors designed specifically for such cooling systems.

Accepta’s advanced technology cooling water scale and corrosion inhibitors have been scientifically formulated to protect cooling systems from the effects of both scale build-up and metallic corrosion in a single product.

Consider our Bromgard chemicals which combine scale and corrosion inhibitors with a bromine precursor added together with an Activator to bring together all round treatment. See the brochure here for more details.

Look out for the  icon which denotes which products are available to order online today.

Bromgard products not only control scale formation, corrosion and fouling but also incorporate a precursor which will produce the powerful cooling water biocide, bromine, when dosed in conjunction with Activator 120 or similar halogen release agent. This simplifies treatment and gives great results!

Bromgard products and a redox control system provides the most cost-effective solution to the use of bromine in a cooling water system.

Bromgard products and activators should preferably only be used in conjunction with a Coolplex controller & manifold as this is the only way to ensure that the Bromgard program provides the correct control of system corrosion, scale & microbiological fouling. 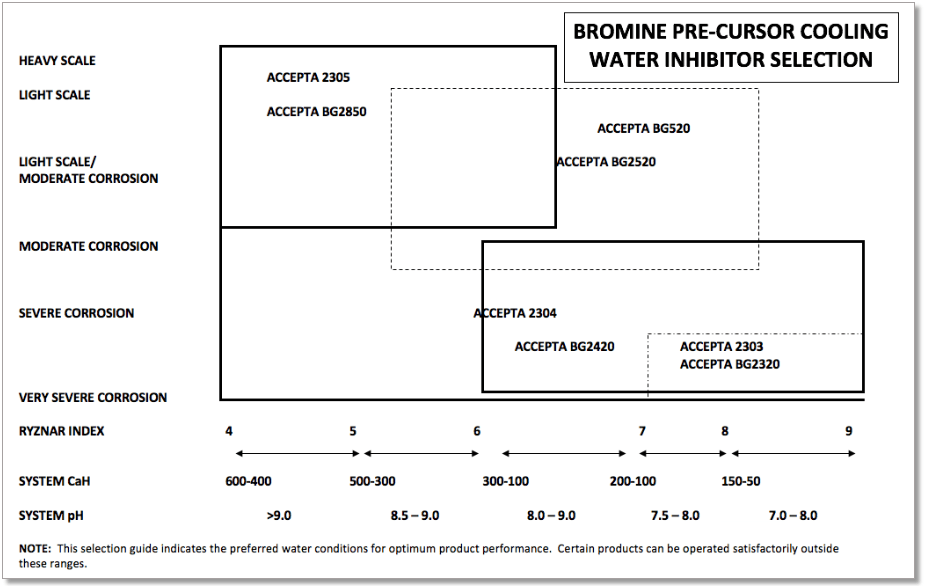 Each of these popular inhibitors is a multifunctional blend which includes both scale and corrosion inhibitors for steel, copper and brass as well as polymer dispersants to prevent fouling, these provide powerful treatment to inhibit scale or corrosion but do not contain a bromine precursor. 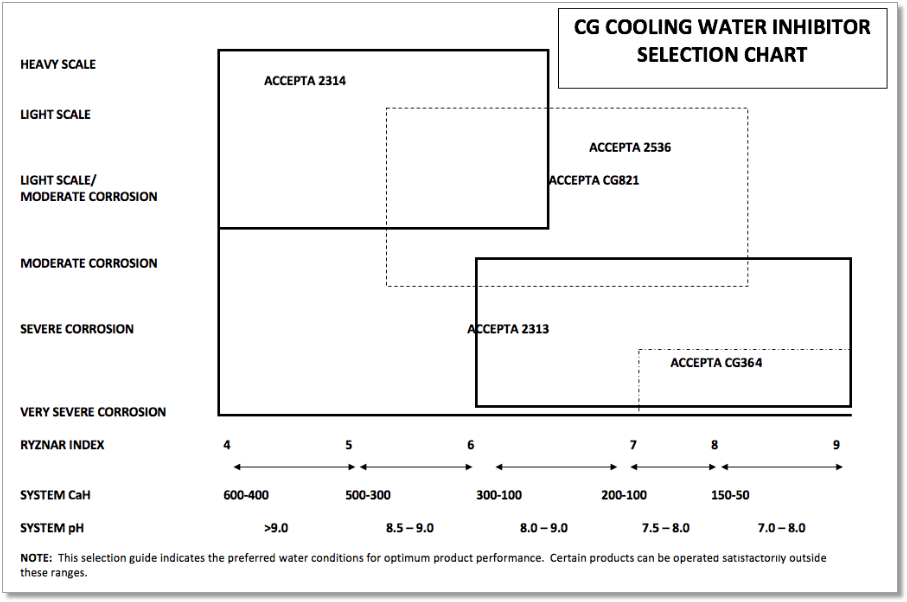 Professor Langelier’s research, complete in 1936, defines conditions in which water is balanced with calcium carbonate, making it possible to predict the likelihood of a given water to either precipitate or dissolve calcium carbonate. Being the universal solvent that it is, if water is out of balance, it will seek to find its own equilibrium (0.0 LSI.) in the case of swimming pools, water can even draw calcium out of the plaster that lines the pool walls,  or in industrial systems draw from the protective coating on pipework at an LSI of -0.5 LSI and below. In the case of over-saturation eg. >0.5 LSI the water will become scale forming.

The relationship between the actual pH of a water sample and the pH at which it is just saturated with calcium carbonate (pHs) is called the Langelier Saturation Index (LSI) and is equal to (pHs – pH).

However, the way in which the LSI is calculated, two different waters; one having high levels of hardness (scale forming), and the other with low level of hardness (corrosive) could theoretically have the same Langelier Saturation Index (LSI) due to the effects pH, Alkalinity and Temperature have on the calculation. For this reason we reach for the Stability index developed by Ryzner (RSI) which goes further and distinguishes between two waters based on an index of actual operating results with waters of various LSIs.

The RSI of water is calculated by: 2 x pHs – pH

The results can be interpreeited according to the following guidelines:

Accepta offers custom chemical manufacturing, specialist toll blending and white label production services for our own water treatment chemicals and client specific formulations to British and international customers. To discover how you could benefit from our environmentally sensitive, quality driven chemical manufacturing capabilities please call us on: +44 (0) 161 877 2334 or contact us.

Accepta was established to provide high quality products that water treatment specialists can use to provide an equally high quality service to their own customer base. We are always looking to add to our growing number of locally based distributors working within the water treatment and related service sectors around the world. If you are interested in becoming an international distributor of Accepta - The Water Treatment Products Company please click here to learn more.
Go to Top
We use analytical cookies to understand how visitors interact with our website helping us to improve customer experience. By clicking “Accept”, you consent to the use of these cookies.
Cookie settingsACCEPT
Manage consent